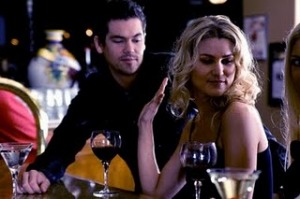 I recently had a very uncomfortable exchange with a man at a bar. Throughout the exchange he continuously reached out and grabbed my butt, ran his hands up my back and grabbed my hips. Every single time he did so, I grabbed his hands and pushed him away only for him to return and try again. He stood so close to me I could smell his breath. Literally being backed against a wall did not help but eventually with a threat and a hard push to the chest, he got the clue and left me alone.  I pose a few questions here.

What in this person’s life let him think that he could touch a woman wherever he wanted even after she said no, repeatedly? What was it that he saw in his life that taught him that this behavior was okay? Was it a movie or maybe the way he was raised?

After my stating that I did not want him to touch me, what was it that made him think- yes, I can and will continue to touch her. Statements such as “Look, you’ve got to stop touching me,” “please back up” and “stop” apparently did not register. What in society taught him to ignore my requests? At least when I was raised, I was told to follow rules and listen to what people said. Maybe that never happened in his life.

The second question I had about the exchange is why didn’t anyone try and stop him? Security, other bar staff and a hundred patrons were in sight of the exchange. One person even came up to me afterwards and told me they saw it happen. But not a single person came over during to stop the guy. Even though it was clear I was pushing the guy away and his advances were not wanted, not a single person even attempted to help. Why? What were they afraid of?

Lastly, I wondered if him doing that in the past had worked. Did he get what he wanted out of women by acting this way? I wonder if he had been aggressive towards women in the past and they allowed it which led him to think he could continue to do it.

A few months ago the Catcalling video went viral. If you haven’t seen it, essentially a woman walks around in plain dark colored clothes in Manhattan and records how men treat her. The video shows several minutes of men catcalling, giving long stares and even those who turn around to follow the woman. Following the video a few concerns were raised about the treatment of women.

That video as well as my recent encounter has led to this call for more respect towards women. Whether you feel that catcalling or grabbing a woman repeatedly after she has requested that you stop is okay, overwhelmingly, women agree that they do not like it. There is no argument about who is right or wrong. The respectful thing to do is knock it off. If someone wants you to stop disrespecting them, you stop.

To Men: Just stop. Women are not there to please you. They are not objects or toys that you can play with. Have respect and treat women respectfully. It is as simple as that. If that was your sister, mother or daughter, would you think that behavior was acceptable? If the answer is no, then don’t do it. If you have questions regarding whether it is okay to cat-call women please the infographic below courtesy of Playboy. Aside from that, keep your hands off unless asked for. Keep your words and actions kind. 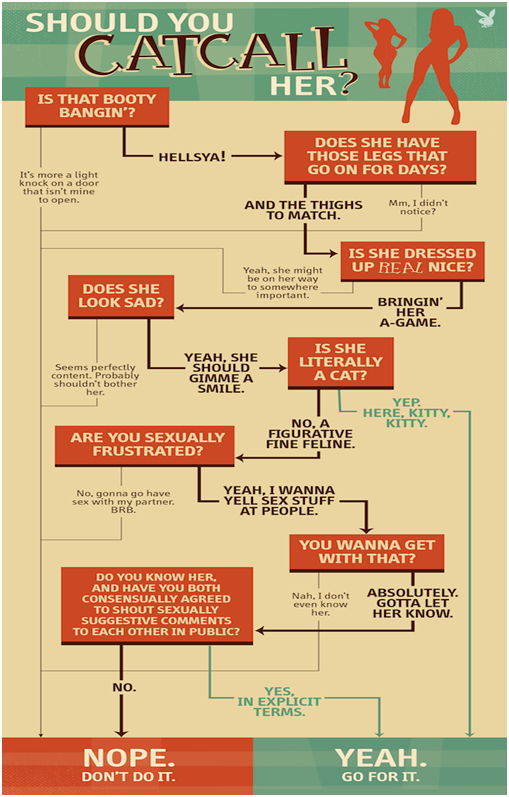 To Observers: If you witness someone disrespecting a woman, it is okay to intervene. If the woman appears to be in distress and the situation does not seem particularly dangerous to interrupt, please do. You could save a life. Seriously. Sometimes men underestimate how scary situations like that can be. Most women know all too well the fear of being aggressively touched, cornered or yelled at. If you think it is safe to do so, you can put an end to disrespectful behaviors towards women.

To Women: If you are one of those that allow men to disrespect you, I implore you to stop. There are certain times when it is not worth the fight and I understand that. However, there are times that you need to stand up for yourself and tell him that his behavior is not okay. It was not okay that the man at the bar touched me like that and I let him know it. He needed to know and I knew he had a lower chance of acting violently due to the setting so I took a shot. But if I ever see that dude again, he will damn sure know not to touch me like that.

Together, if we start showing our disapproval we can change the culture. But in order to do so we all need to work together. If we take disrespect towards women seriously, eventually we may snuff it out.

The Cyber Feminism Movement and Why We All Need It 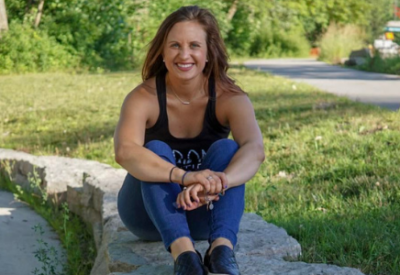 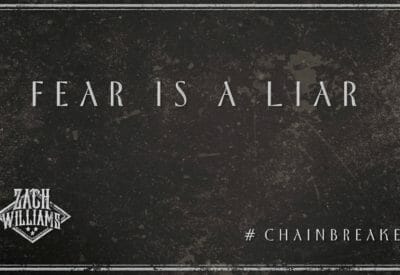 Fear is a Liar

My Story: How I Fight #LikeAGirl 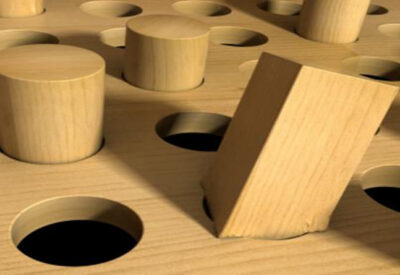 Square Peg in a Round Hole 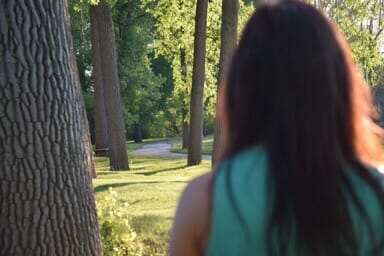 My Story of Living With Irritable Bowel Syndrome (IBS)