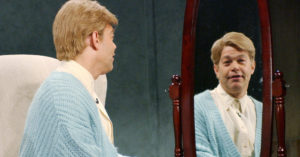 As a teenager, I used to watch Saturday Night Live, and one of my favorites was “Daily Affirmation With Stuart Smalley”. He would stare into the camera with his sweater on and say “I’m good enough, I’m smart enough, and doggone it, people like me” or “Compare and despair”.

It was obviously a poke at our self-help culture and at the time I thought it was hilarious. No one in my house was starting into mirrors affirming themselves. If we had, we would have been endlessly ridiculed.

Never could you have told me as a fourteen year old that I would grow up to make affirmations a part of my daily life. I am Stuart Smalley without the cardigan and doggone it, I like it! Now, I don’t do it while staring longingly in the mirror at myself, but I do write down ten affirmations everyday in a journal. Why? Because it makes me feel good.

I am reprogramming my brain.

I am telling it to stop believing all of the negative things I’ve been repeating in it for the last few decades. All those times I berated myself for not being perfect, for being late, burning dinner, forgetting important stuff, gaining weight, having a pimple, or hurting someone else. All those times I believed lies, let someone else tell me what to do, or forgot that I was a cool person worthy of the good stuff.

It happens. Life happens and you can get down on yourself.

You compare you inside thoughts and feelings to other people’s outside lives and start to feel inferior. You think you need something outside yourself to make you a complete person. The next thing you know you have created a really nasty negative tape that plays on repeat in your brain.

It goes something like this, “I’m such an idiot, why did I do that? I never get what I want because I don’t deserve it. Sure eat the pizza fatty. Why would they look at you, you’re ugly. You need to do this or that and it is more important than what you want to do. Other people’s needs are more important than yours because you’re just not as special or pretty or powerful or important.”

I know it is ugly.

I once pledged for a whole week to write down whatever the tape in my head said at the end of the day. I stopped on day three, because I got the point and it hurt to much to see it in writing. If you are curious, try it for a day and see what you come up with. There is something about seeing in in writing, it makes it real.

After those three days, I got myself a little notebook, and started writing affirmations everyday. I thought of it as emotional warfare. I had to try to counteract all of the negative going on in my head with some positive. The reality of it was that the negative thoughts were mostly not true. I needed to replace them with their positive opposite.

I’m telling you that it will change your life.

After a while, when that negative tape starts playing, you will stop and think wait a minute that isn’t true. I’m healthy and whole, I’m amazing and full of goodness. You might notice that other people want to treat you in a way that doesn’t jive with your new messages and you might want to give them a heads up that they are mistaken about who they think they are taking to. You might start trying new things, meeting new people, and getting assertive

Affirmations can seem benign and silly but make no mistake, they hold within them a power you cannot imagine if you practice them and believe them. Walt Whitman wrote, “I am larger, better than I thought, I did not know I held so much goodness.” I wish for all of you to feel larger, better, full of goodness. Affirm it and you will live it.

Like Carries’s article? Check out more of her articles on The Odyssey Online Self Love Beauty community. 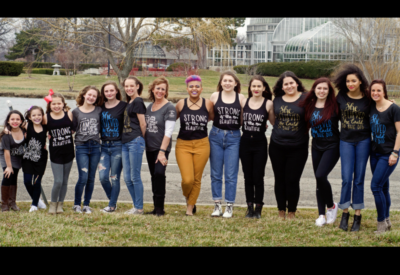 8 Ways to keep your News Year’s Resolutions in 2016

The Heart Wants What It Wants

11 Reasons Why We Love Amy Schumer